London: The scene is painful to watch. Having been invited by Camilla Parker-Bowles (Emerald Fennell) to lunch, Princess Diana (Emma Corrin) slowly realises how close her host is to her fiance Charles, the Prince of Wales.

Camilla makes it distressingly obvious just how intimate her relationship with Charles was and continues to be. 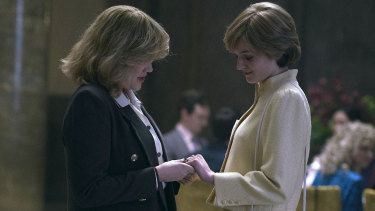 Camilla Parker-Bowles (played by Emerald Fennell) and Diana Spencer (Emma Corrin) in a scene from The Crown filmed at Australia House.Credit:Des Willie/Netflix

To the bulimic Diana, who initially refuses to eat, it is all too clear how little she knows of the man she is about to wed and how little he has sought to know of her. The Fairytale lunch episode of The Crown, is nothing of the sort.

Corrin's first unofficial audition for the role of Diana in the Netflix drama's fourth season was a chemistry reading against the candidates cast for Camilla's role of the lunch scene.

The chemistry crackles between the two women. But the mood is gloomy, just like the dark, marble-filled surrounds which, to the eagle-eyed, are highly recognisable as an Australian backdrop.

It was filmed at Australia's oldest foreign mission — Australia House in London. 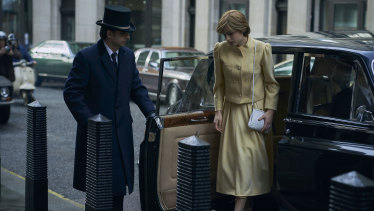 Diana Spencer (played by Emma Corrin) lunched with Camilla Parker-Bowles before her marriage to Prince Charles. The scene in The Crown was filmed at Australia House.Credit:

The clues are there from the moment Diana gets out of the car to enter the restaurant. The street is Melbourne Place.

What is not shown is the lavish entrance recognisable not just to a select group of Australians who have ever had cause to enter the High Commission, but also to the hundreds of millions around the world who have watched the Harry Potter film franchise.

While the exact numbers are commercial-in-confidence, the Australian High Commission can charge film companies tens of thousands of pounds in exchange for access to film in and around the 102-year-old building.

Neither side will disclose what sum was paid to transform the exhibition hall into the old Knightsbridge restaurant Menage à Trois.

The 1980s eatery, now closed, was run by Antony Worrall Thompson and famously only served starters and desserts, a point Camilla makes in the scene.

The Crown's director Ben Caron told the program's official podcast that their dramatisation of the encounter was never meant to involve food.

"That's a really interesting scene because the food part of that was never written into the scene," he said. 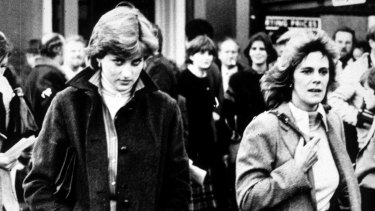 "I just thought that idea of her going in there and sitting in a restaurant that serves starters and desserts must have been hell and so we start the scene and it's two women trying to sort of understand who the other one is, where their territory is."

In the episode, the encounter was organised by Charles, who tells Diana before he boards a plane for his six-week tour of Australia that he has asked Camilla to get in touch with her.

The lunch actually did take place but where is not confirmed. According to Andrew Morton's Diana: Her True Story — In Her Own Words, Camilla penned a "friendly note" inviting Diana to lunch.

"It was during that meeting, arranged to coincide with Prince Charles’s trip to Australia and New Zealand, that Diana became suspicious. Camilla kept asking if Diana was going to hunt when she moved to Highgrove," Morton wrote.

That is a pastime Charles and Camilla used to enjoy together.