NSW has hardened its stance on travel to and from South Australia, issuing advice to avoid unnecessary trips until the Adelaide COVID-19 outbreak is under control.

Premier Gladys Berejiklian said she was confident South Australia had the virus under control but urged people to delay travel plans. 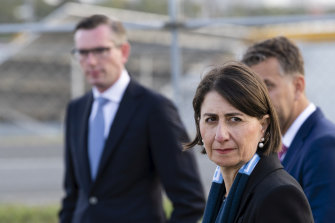 Her advice follows Queensland, Western Australia and Tasmania imposing restrictions on travellers when the Parafield cluster in Adelaide grew to 17 cases on Monday. Victoria has issued similar warnings, with its Health Minister Martin Foley adding that truck drivers would be tested once they cross into Victoria.

By Tuesday night there were 21 cases, but the South Australian Premier flagged the "very likely" prospect of 14 new cases being confirmed later on Wednesday morning.

"The borders are completely open but if it's non-essential travel, think about whether you want to go in the next few days," she said.

NSW Health Minister Brad Hazzard issued a stronger message to residents planning to travel to SA in the coming days.

"Don't travel unless you have to," Mr Hazzard told the Today show.

"And I have to say to our friends in Adelaide, don't come to NSW unless you really have to – family or really imperative business. Don't come until things are sorted."

Mr Hazzard again ruled out closing the border, but he said passengers arriving on flights from Adelaide were being quizzed at the airport.

"I've asked the NSW Health authorities to step up the surveillance. So whenever a flight comes in now, we're doing full check, asking where people are going. We want to be able to track people and talk to them about the issues," he said.

Mr Marshall told Adelaide radio station 5AA that it was possible more restrictions would be imposed on South Australians on Wednesday as authorities race to squash the outbreak.

Four thousand people are in self-isolation after being identified as possible close contacts with confirmed cases.

There are long queues for testing with one woman telling talkback radio she waited seven hours for a test on Tuesday.

Ms Berejiklian said NSW recorded its 11th day in a row without locally transmitted cases of COVID-19 on Wednesday. There were seven cases in hotel quarantine.