One in five schoolchildren – more than 750,000 – have experienced cyberbullying in the past year and experts warn coronavirus isolation is likely to have made it WORSE

Almost a fifth of older schoolchildren in England and Wales have been the victims of cyberbullies in the past year, shock statistics revealed today.

Nineteen per cent of youngsters aged 10-15 admitted they had been targeted by appalling behaviour online, according to the Office of national Statistics (ONS).

Being called names, sworn at or insulted was the most common form of cyberbullying, with the problem experienced more frequently by children with a long-term illness or disability.

The ONS warned that the situation may well be far worse, with the data released in today’s research collected before the enforced school closures in the spring and summer.

Sophie Sanders, from its centre for crime and justice, said: ‘Greater use of smartphones, social media and networking applications means online bullying can follow a child anywhere they go.

‘Using new data from the crime survey we can see that around one in five children between the ages of 10 to 15 had experienced some form of online bullying in the previous 12 months.

‘This compares with two in five children who experienced bullying in person, and whilst these data were collected before the coronavirus pandemic, children’s isolation at home and increased time spent on the internet is likely to have had a substantial impact on the split between real world and cyber bullying.’ 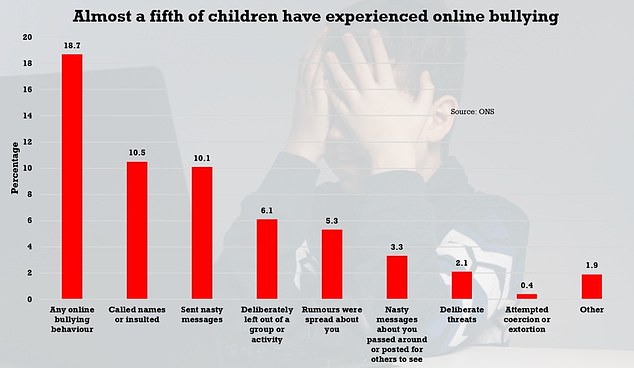 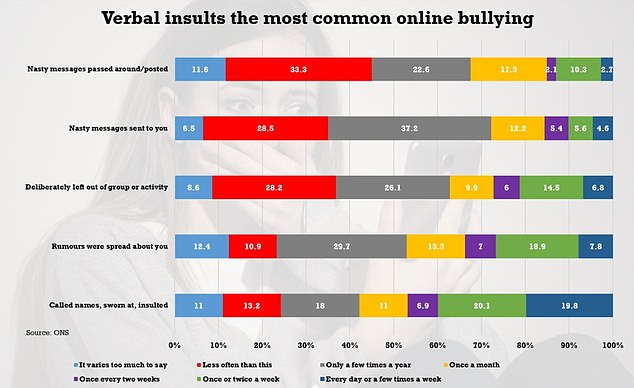 The research, based on data from the 10 to 15-year-olds’ Crime Survey for England and Wales (CSEW), looks at online bullying behaviour in the 12 months prior to March this year when the lockdown began.

Researchers suggest the split between in-person and online bullying is likely to have changed substantially in the period after data was collected due to isolation at home and more time spent online.

Overall, 19 per cent of children aged 10 to 15 years in England and Wales experienced at least one type of online bullying behaviour in the year ending March 2020 – the equivalent of 764,000 children.

Nearly three out of four (72 per cent) children who had experienced an online bullying behaviour experienced at least some of it at school or during school time.

In the survey, children were first asked to identify any nasty things that had happened to them or been done to them from a list of behaviours commonly recognised as bullying.

Children were later separately asked whether or not they would describe the experiences as ‘bullying’.

More than half (52 per cent) of children who experienced online bullying behaviours said they would not describe it as bullying, while more than one in four (26 per cent) did not report their experiences to anyone.

The majority (68 per cent) of children were emotionally affected by their experience of online bullying, it found.

An NSPCC spokeswoman said: ‘These findings are deeply concerning and echo what our Childline counsellors hear on a daily basis.

We know online bullying is incredibly traumatic for young people and that it can feel impossible to escape.

‘Lockdown has exacerbated these feelings and from April to October our trained counsellors held more than a thousand counselling sessions with young people about online bullying.’