Candace Owens has come under fire for her controversial comments about Harry Styles’ Vogue cover photoshoot.

It began over the weekend when the conservative commentator and BLEXIT founder criticized Styles for wearing a dress on the cover of the fashion magazine, calling it “an outright attack” on Western civilization. And many Twitter users, including several celebrities and Styles’ passionate fan base, were absolutely outraged.

“There is no society that can survive without strong men,” Owens tweeted on Saturday. “The East knows this. In the west, the steady feminization of our men at the same time that Marxism is being taught to our children is not a coincidence. It is an outright attack. Bring back manly men.”

In the wake of Owens’ comments, Twitter was thrown into a frenzy. While some fans came to the “Watermelon Sugar” singer’s defense, others ripped Owens directly.

“You’re pathetic,” wrote Olivia Wilde, while Jameela Jamil wrote, “Harry Styles is plenty manly, because manly is whatever you want it to be, not what some insecure, toxic, woman-hating, homophobic d–kheads decided it was hundreds of years ago. He’s 104% perfect.”

Kathy Griffin also chimed in, writing, “Candy Owens doesn’t know what she in for going up against the Harry Styles stans.”

“Harry Styles spreads peace and love wherever he goes,” tweeted journalist Molly King. “I only wish when I was a teen the top rock stars weren’t using violent lyrics to describe women. Candace you upset more people than Harry with your cruelty.”

In a popular tweet, a fan wrote to Owens: “Harry Styles can pull/lift 500 pounds with just his upper body. That’s more than enough to handle the dead weight of your career, Candace.”

Many users, including Jamil and actor Jeffrey Wright, posted photos of men wearing dresses or more feminine garb throughout history — and in the East — to challenge Owens’ argument that “the East knows” that “there is no society that can survive without strong men.” 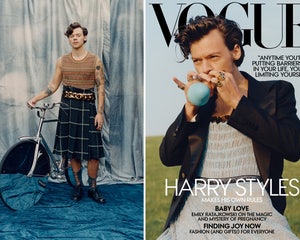 By Monday morning, Owens — as well as Styles — became trending topics on Twitter. In response, the pro-Trump activist reacted to the backlash by doubling down on her controversial stance, saying Styles wearing a dress is “stupid.” Owens also reiterated her call to “bring back manly men” and even created a hashtag.

“Since I’m trending I’d like to clarify what I meant when I said ‘bring back manly men.’ I meant: Bring back manly men,” she tweeted. “Terms like ‘toxic masculinity,’ were created by toxic females. Real women don’t do fake feminism. Sorry I’m not sorry.”

“PSA: Mining pictures on the internet of men in dresses is not going to suddenly make me attracted to men in dresses,” she wrote alongside a tweet from a critic who shared photos of Iggy Pop, David Bowie and Kurt Cobain cross-dressing.

“I’m impervious to woke culture. Showing me 50 examples of something won’t make it any less stupid. #BringBackManlyMen.”

Check out the backlash in the tweets, below.