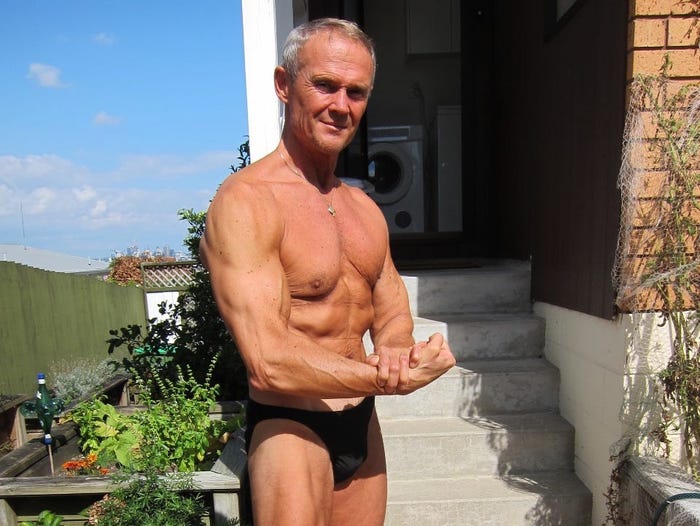 Dusan Dudas is used to getting questions about his age. When he goes to the beach (which he does often, as a personal trainer in New Zealand), people frequently ask how old he is and how he manages to stay fit.

"They don't believe me when I say I'm 65," Dudas told Insider. "I'm still working out, and I'm still in very good shape. I can't complain."

Equally perplexing to many people is the secret to his impressive physique: a vegan diet, rich in raw vegetables and fruits.

"People think that the best protein is only from meat and dairy products, but they forget one important thing," he said. "If gorillas, elephants are some the strongest animals on the planet from only eating plants, why can't I be?"

Dudas, originally from Slovakia, moved to New Zealand in 1994, and found great success in amateur bodybuilding competitions. His competitive highlights include four first place wins in the Mr. New Zealand competition, most recently in 2015, at age 60.

He's now retired from bodybuilding and works as a personal trainer and nutritionist, with no shortage of clients who want to follow his example in sculpting strong, healthy bodies.

The secrets to his success, he said, are eating plenty of fresh fruit and veggies, lifting weights instead of doing cardio, and not overtraining.

He went vegan overnight after a health scare

Dudas hasn't always been in peak health. He first transitioned to a plant-based diet after a health crisis, when he collapsed suddenly at age 52. Doctors diagnosed him with high cholesterol and high blood pressure and said that with his family history of cardiac disease, he would need medications to manage his serious risk of heart problems.

At the time, Dudas' wife suggested he try eating differently, and gave him a book about the health benefits of veganism. Intrigued, Dudas went all in, reading as much as he could about plant-based nutrition and following the experts' recommendations to the letter.

"I went vegan overnight. For three weeks, I ate nothing but fresh vegetables and greens," Dudas said. "Then when I went to see a specialist, he was the one who nearly collapsed, because he couldn't believe how fantastic my condition was."

Since then, he's expanded to include grains and legumes, but still tries to make raw produce at least 80% of his diet routine.

He eats the same thing nearly every day

Dudas follows a specific daily diet, almost down to the minute. First, upon waking up, he drinks a tea of stinging nettle leaves and distilled water.

Then, 15 minutes later, he has what he calls his "power juice" — a freshly-juiced blend of four carrots, and apple, a beetroot, 2 small turmeric roots, ginger, and broccoli.

Half an hour after that, he enjoys a fruit salad of bananas, apples, wheat grass, and lemon. For protein and fiber, he eats a hearty serving of raw oats, soaked in organic soy milk from Italy until softened.

If he's hungry mid-morning, a snack of brown rice tides him over until around noon, when he has a lunch of cooked lentils with two cloves of garlic and nutritional yeast.

Around 4 PM, Dudas has a snack of vegan chicken (the only kind of processed vegan food he likes).

Then for dinner, he sits down to two baked sweet potatoes and some oven-roasted pumpkin.

This is his daily routine, and has been for years.

"I haven't had to do anything differently, because I feel great," Dudas said.

In total, Dudas estimates he eats about 2,500 calories per day. But he doesn't track them daily, nor does he count carbs, or calculate his dietary fat or protein intake.

Instead, he pays attention to how he feels, and whether he likes the results he's getting for his physique.

"The best for me is my mirror. If I see in the mirror that I'm getting fat, I change what I eat," he said.

While many people, bodybuilders included, spend hours on a treadmill to burn calories, Dudas isn't a fan.

In his opinion, running is helpful if it raises your heart rate, but it takes far too long to be effective.

"Isn't it very boring to do cardio for three hours? People go to the gym for an hour because they don't have time," he said.

As for the alleged fat-burning potential of cardio exercise, Dudas said that, too, is unnecessary, since a plant-based diet is also helpful for weight loss and maintenance.

Dudas still exercises regularly, lifting weights 4 times a week. However, he limits his sessions to an hour at most — overdoing it in the gym, he said, can cause the muscles to break down beyond the body's ability to repair them efficiently.

Instead, he focuses on smaller sets of exercises that work the entire body. His favorite is weighted squats.

"There's something fantastic about that exercise. It makes the whole body stronger, and it makes the heart and lungs stronger because you're breathing hard. That's why I love squats," Dudas said.

Dudas prioritizes excellent form, moving slowly throughout the exercise, for about 8 repetitions, and will do several sets of each exercise this way.

For a post-workout snack, Dudas enjoys fresh fruit with 10 grams of Mānuka honey, a rare, specialized honey from New Zealand that's believed to have exceptional health benefits. That after-exercise boost, he said, is crucial because it helps refuel and prompt the body to build muscle, not break it down.

Why vegans and meat-eaters can't stop attacking each other